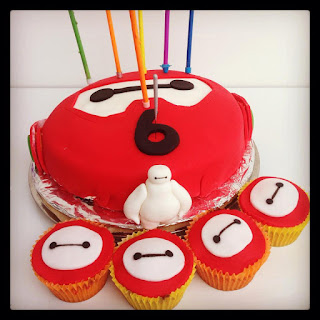 Big Hero 6 has to be our new all time favourite Pixar movie.

If you haven't seen it yet, you should! Kids or no kids.

So when it launched shortly before my soon to be 6 year old's birthday, it was a done deal in terms of the cake.

Baymax was such a lovely character on screen, I would do my utmost to re-create it in fondant.

I have to say, this was one of the easier cakes I've made to date and I even tried making some cupcakes and a cake topper. 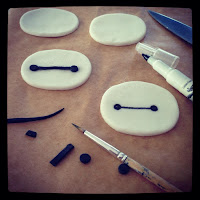 For the cupcakes, we simply covered the top of the cupcake in a circle of red fondant icing, then cut a smaller circle of white icing and drew the two black eyes with the black line across the centre with an edible pen.

We did try using black fondant and using edible glue, but it the overall effect was much more cumbersome and much more fiddly!

Whilst I'd only made 12 cupcakes, the edible pen was a much quicker option. I'm all for easy options! 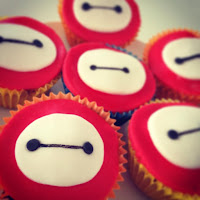 The cupcakes were given away at the party, instead of cake.

Each child got their own Baymax to take home and they looked rather effective in their mini take out boxes, even if I do say so myself. 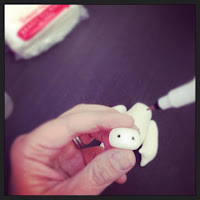 As I'd clearly got the Baymax bug, I tried to make a mini cake topper. I rolled out each of the component parts and added details with the edible pen.

I then glued all of the body parts together with edible glue and hey presto! 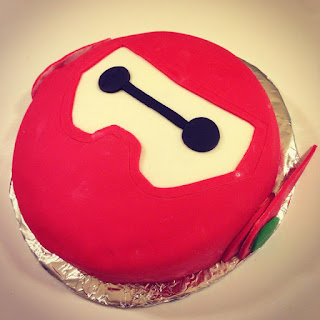 For the Baymax head, I baked a simple circular cake.

Once cooled, I added a layer of white fondant icing on top of the cake, using buttercream as my glue.

I then rolled out enough red icing to cover the whole cake and then gently laid it across the cake and with a sharp knife, scored the shape for the helmet.

Removing the red icing from the cake, I then cut the shape out, before finally laying it on the cake and smoothing out across the whole cake.

With the left over icing, I then make the shapes for the side of the helmet. 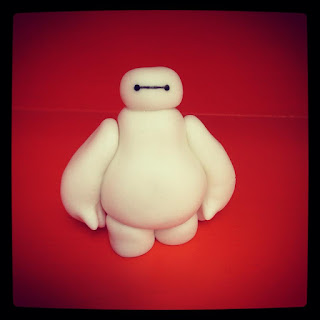 And here's a close-up of my Baymax cake topper.

Yoda cake - test me it did! 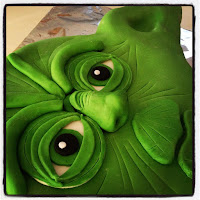 There's only one thing for it when you have a Star Wars uber fan in your household and it's their birthday.

I have a daughter who happens to be Star Wars mad, so for her birthday it had to be something Star Wars based for her cake, but what?

There are so any characters to choose from...

Having researched a few different ideas online, I decided to go with my own take on the iconic Yoda. 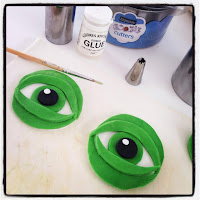 There are some phenomenal 3D Yoda cakes out there, but I know my limits, so I started by creating two circular cakes. One for the head and the other for his oversized ears.

Next, I shaped the eyes and got them to the right size for my cake, adding layers of green fondant icing to make them appear wrinkled.

When I was happy with the size of the eyes I started on the other facial features. It's worth noting the small circles of white icing - this just 'makes' the eyes. 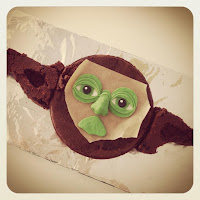 I started on the nose and mouth and placed them on greaseproof paper, then laid them on top of the cake to ensure it was all in proportion.

Then I cut the second circular cake into two pointy ear shapes and cut out a hole in the middle for the centre of the ear.

I use wooden kebab sticks as dowling rods, to ensure the ears stay fixed to the side of Yoda's head. It looks a bit odd, but I promise once the green icing is laid over the top, they will look more like Yoda's ears. 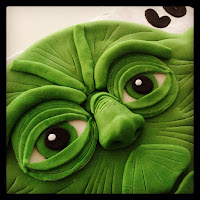 Once the icing has been applied, covering the face and ears, it's then time to add more rolls of icing and gently use a sharp knife to create the illusion of wrinkles.

The more wrinkles the better!

I also added more layers of icing over the eyelids which helped to make him look more like Yoda.

The nose was a little tricky and I used the end of a wooden spoon to make his nostrils. 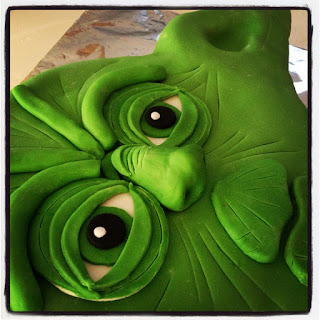 Here's the final shot of my Yoda head.

My 8 year old was happy and despite a few reservations in the initial stages, I was pretty happy with the result too.

(Although, it has to be said I'm not a fan of fondant icing!)

Following a request from my middle child for a sock monkey for Christmas, I set about the search. 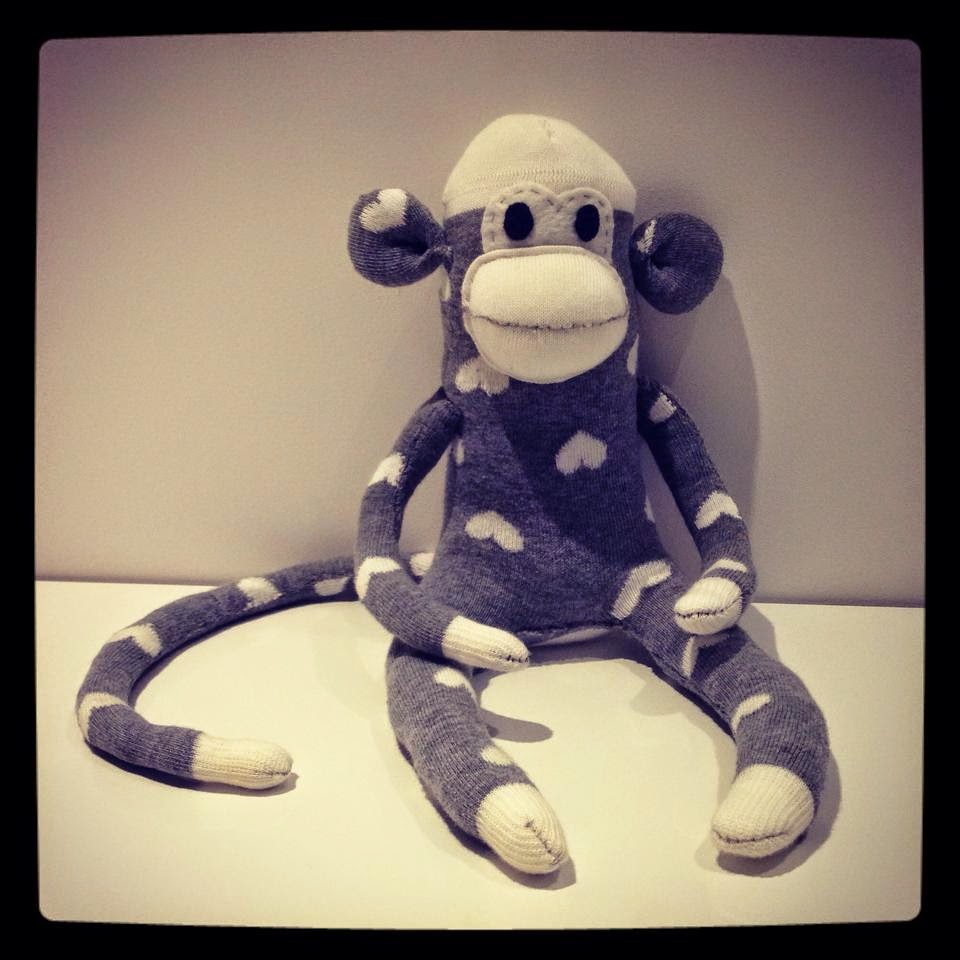 There were an array of fabulous designs and colours but having seen an abundance of tutorials, I decided to have a go myself.

I found this fabulous tutorial courtesy of Pinterest and armed with the perfect socks, I got cracking.

For the monkey pictured above, I used an adult sock but you can use any size and in fact, I may try a smaller sock for my next one. 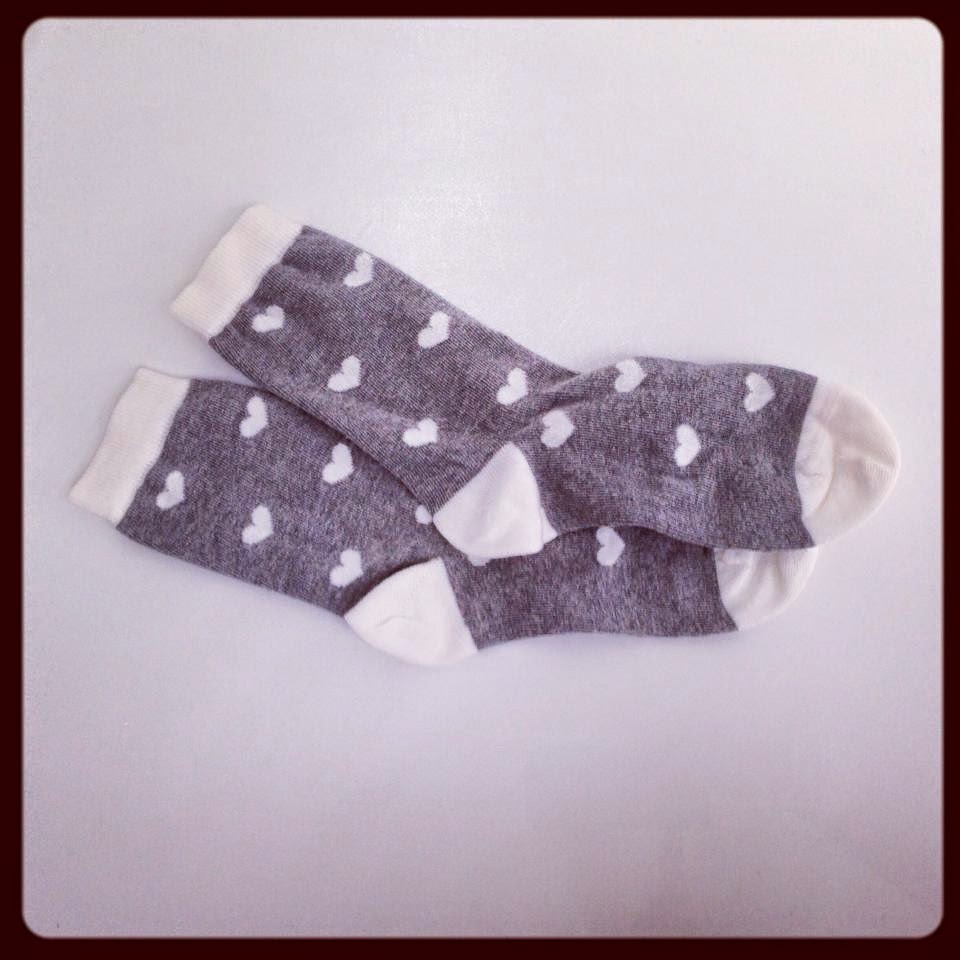 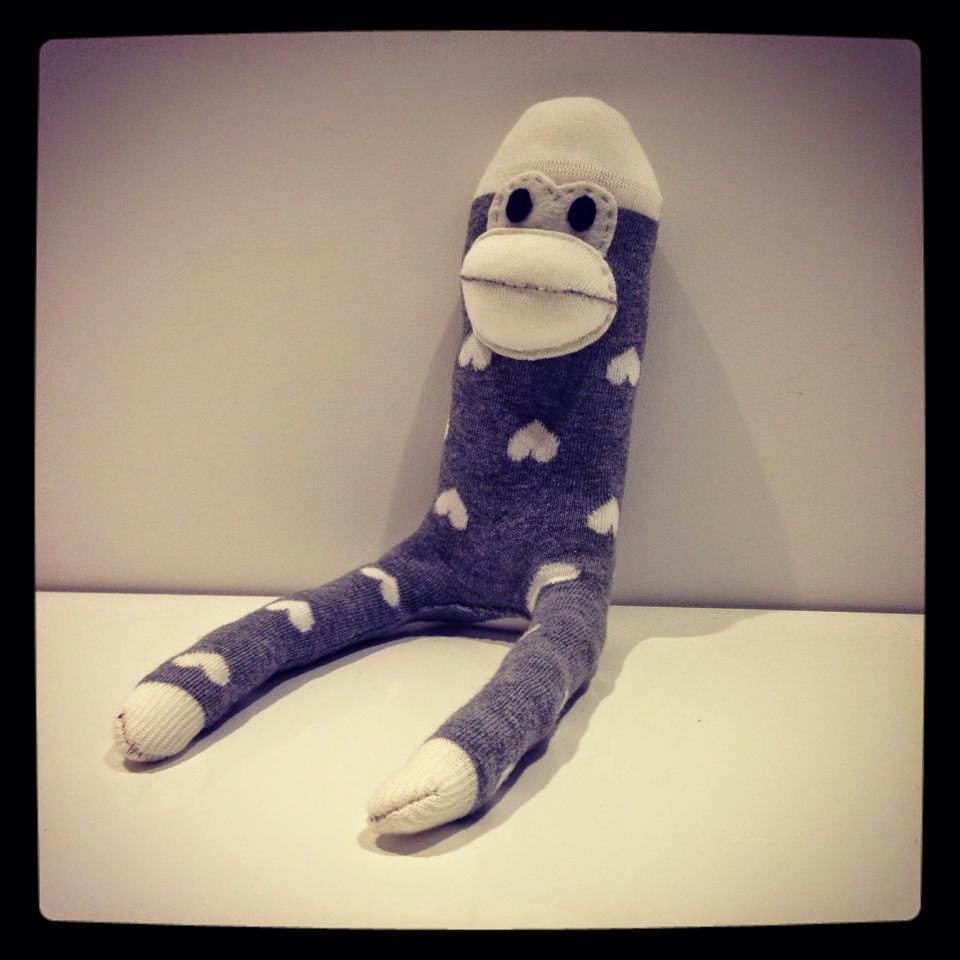 Minus a tail, but almost there. 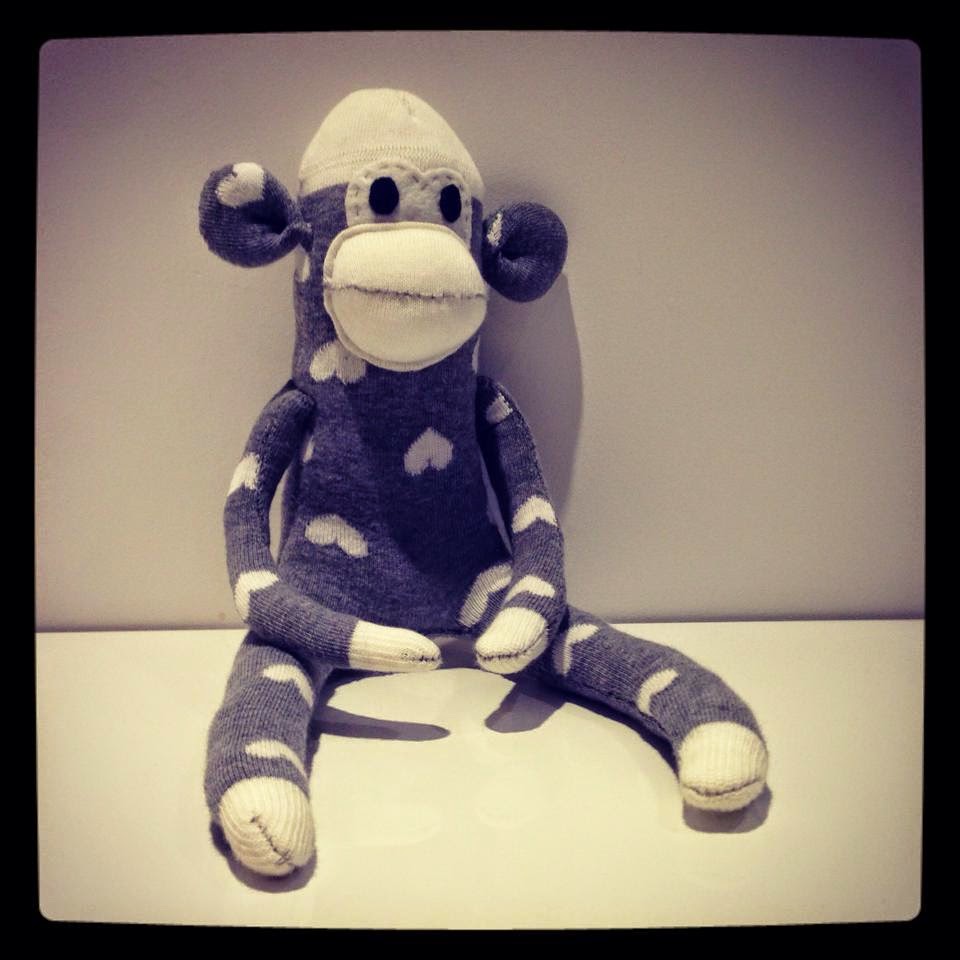 Today I experimented with brown paper, and red cotton... This is the result. 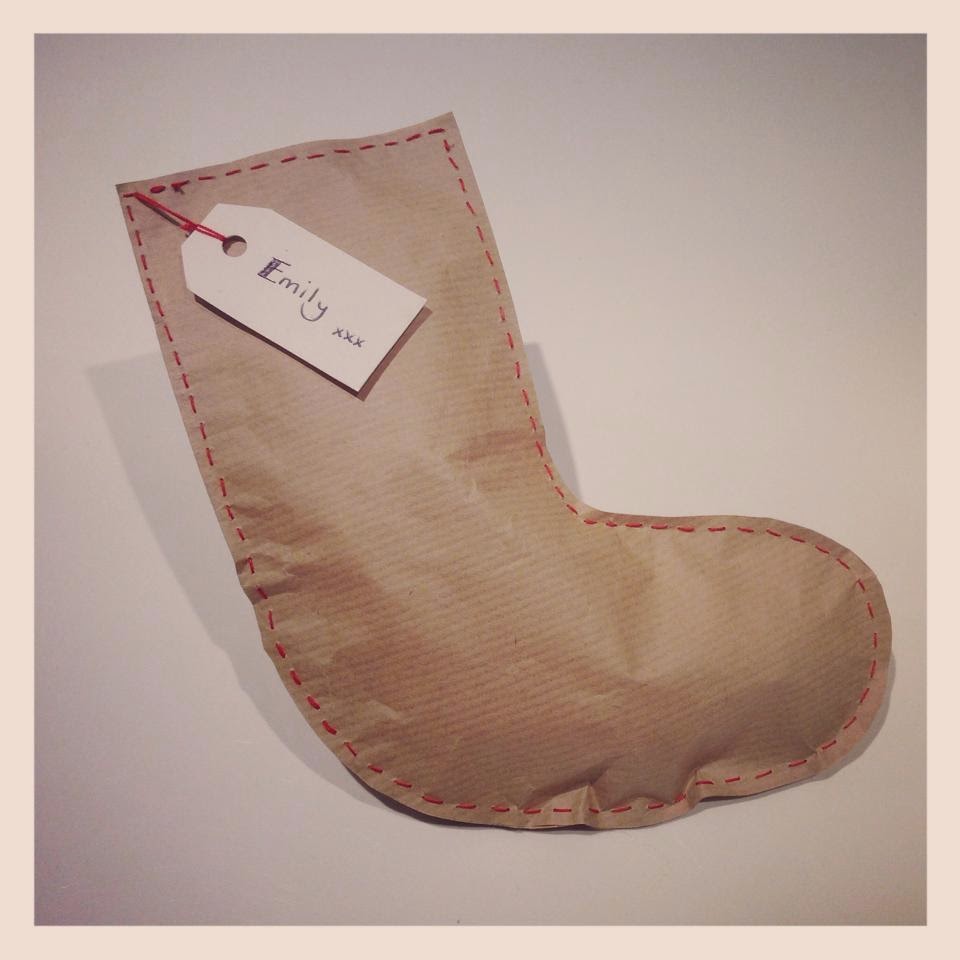 I'm fairly pleased with these treat-filled stockings and plan to make some stars and hearts to accompany the stocking. 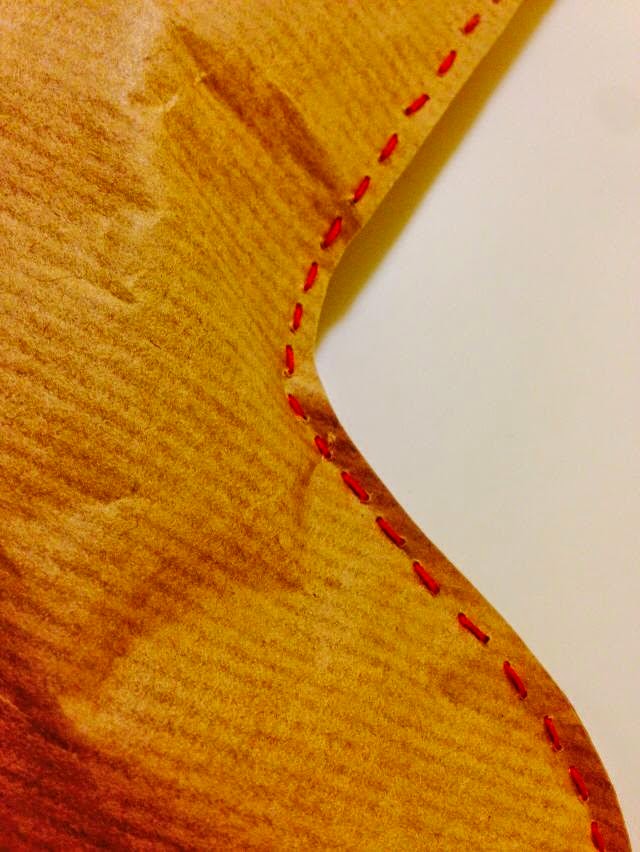 They're stitched by hand, using a simple running stitch and a thick, quality thread. 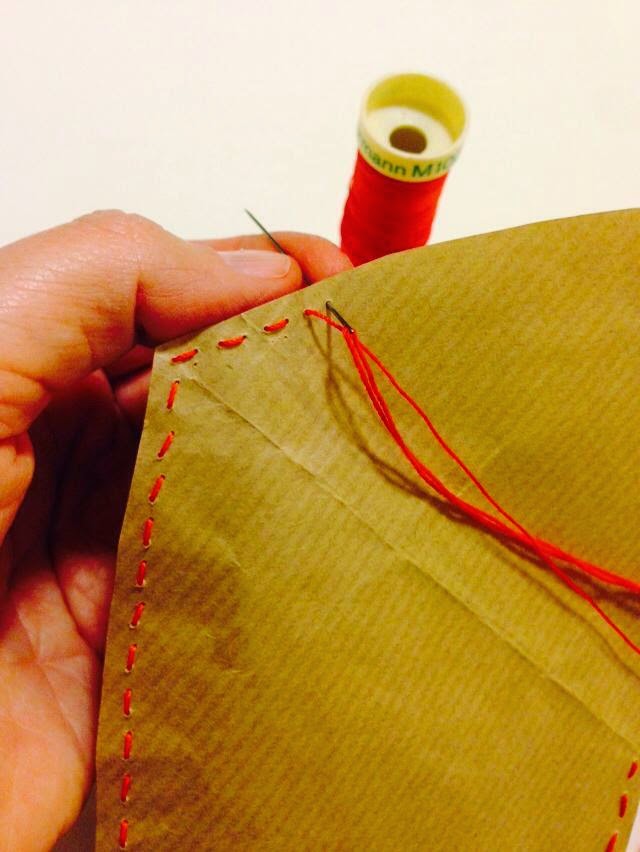 This stocking is filled with small Toy Story characters and intend on filling others with sweets. More updates to follow later.
Posted by Unknown at 10:37 No comments:

Over the last few months, I've loved building up my audience and the people whom I follow on Twitter and have thoroughly enjoyed their creative giveaways. As I approached 1000 followers, I decided to do my own giveaway. One of my hand painted peg people was to be the prize. 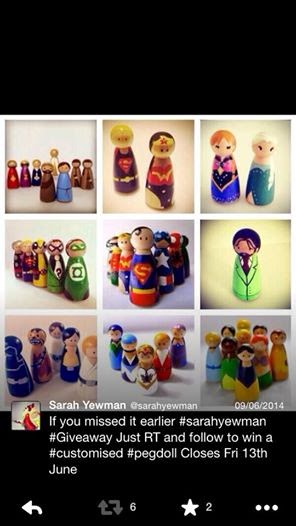 After 50+ retweets and a few more followers, I randomly drew the winner (and I swear this wasn't fixed). The winner happened to be a fellow Chelmsfordian, Georgia Coote a very talented surface pattern designer. I asked Georgia what she would like me to create and she plumped for a 'mini-me' pegdoll, sporting a floral dress. 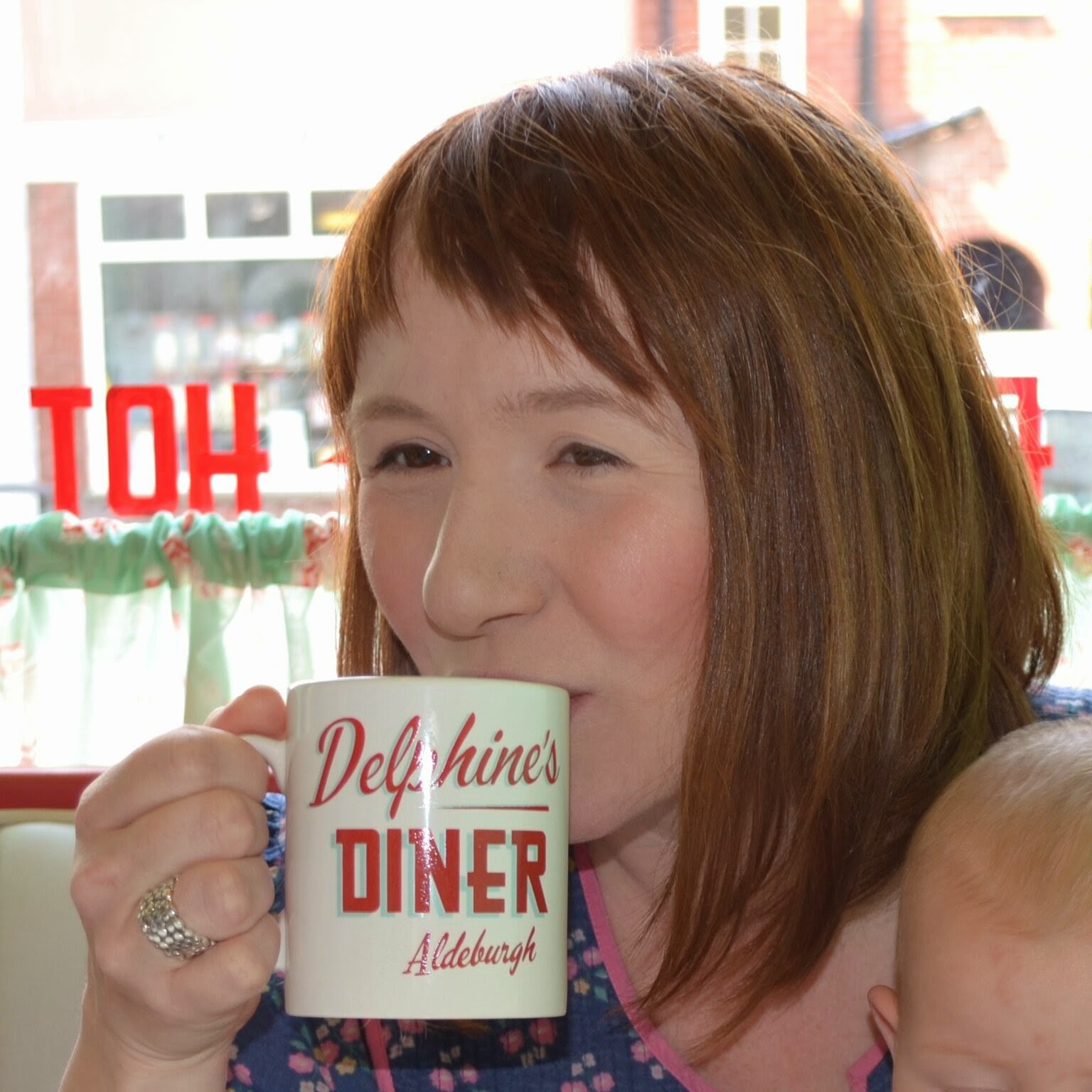 And here's her 'Georgia' peg doll 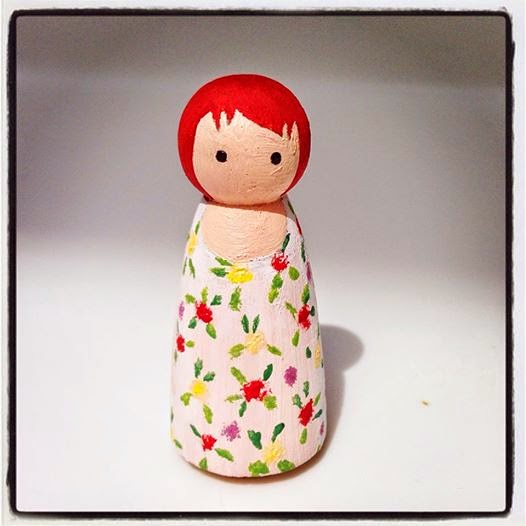 Georgia, posted a picture of her 'mini-me' on Instagram and here's her final resting place and a beautiful one at that. 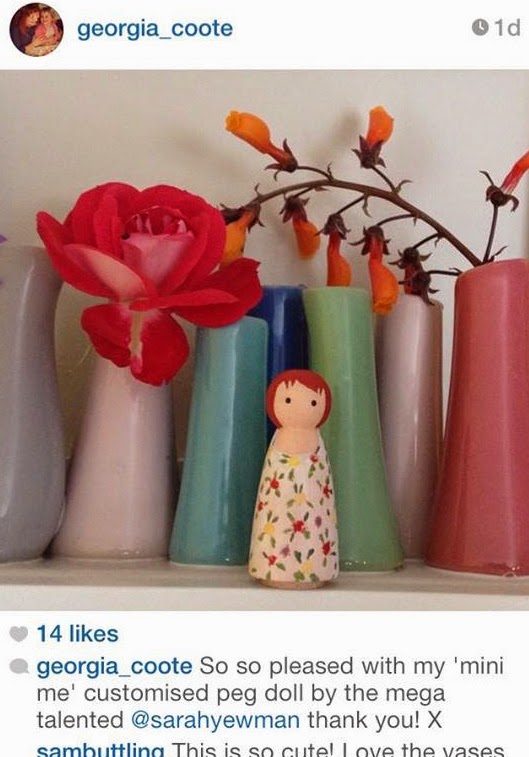 Keep your eyes peeled, as I may be offering one of my customised vinyl toys for my next giveaway. 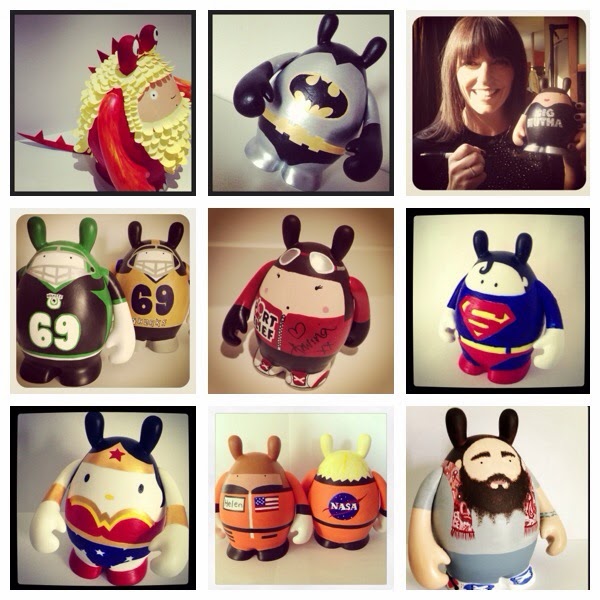