Not my usual Monday morning granted, but a damn near perfect one.

A monster making workshop at Pick Me Up London in the beautiful Somerset House in conjunction with Creative Review. 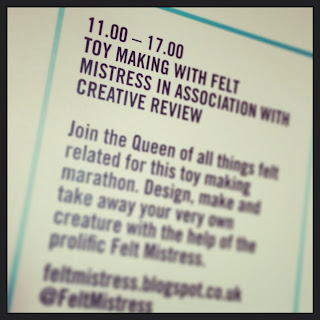 An abundance of felt, pins, patterns, glue, googly eyes and none other than THE Felt Mistress as our trusty coach.
All who know me well will know that this is my idea of therapy.
I've admired the Felt Mistress's (aka Louise Evans) work for a while having seen a number of her amazing character creations. If you haven't yet seen them, you really *must*.
Following my recent work with Dudebox, I also was drawn to her own fabulous felt Dude.

I arrived early and had a wander around the Pick Me Up art on offer, continually checking my phone for the time, as there was no way I was missing this fabulously felty opportunity.
I managed to snap the Felt Mistress and her team preparing for the enslaught. 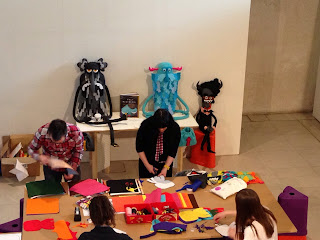 We started at 11am prompt and I was first to take my seat.
By midday, a steady queue had formed and the room was full of people wanting to get their hands on some felty fun.

Louise and her other half, Jonathan Edwards (@Jontofski) pulled together a beautifully designed help sheet, which kept us all on point. 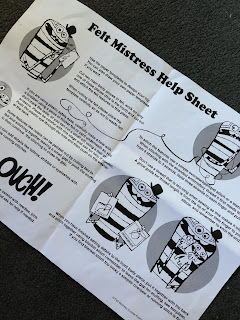 They make a great couple, as Louise explained she can only work in 3D, whilst Jonathan is a fabulous 2D artist. (See Jonathan's work below)
I grabbed my template and set to work making my monster. 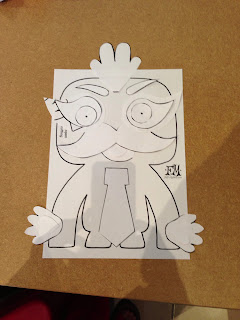 All the while, we were presided over by the Guru's

I chose my colours, cut out the core shapes, started layering and here he is slowly coming to life. 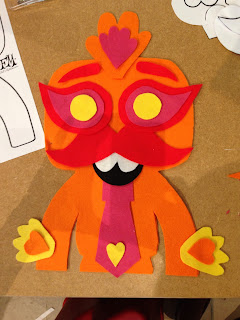 Some design inspiration provided by Felt Mistress.
After 4 hours solid of cutting, stitching and stuffing, I hadn't left my seat for a second (except to get much needed materials) and hardly looked up from my emerging monster.
But I had finally completed him.
Stuffed, stitched and a character in his own right.
Meet Monty, complete with handle bar moustache and pink tie.

And here he is relaxing on our train ride home 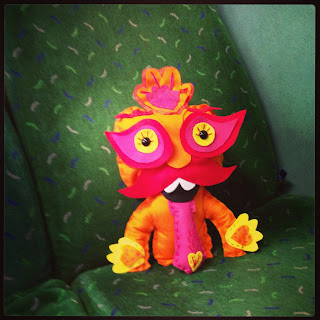 Another treat, Jonathan had been sketching away as we worked.
This was my idea of heaven.
A fabulous event that ANYONE could have taken part in, not just those with sewing skills.
There were so many wonderful creations emerging and I'm pleased to have seen some of the finished articles on Twitter since the workshop.
I have no idea where the 4 hours went, but they went far too quickly and I'd do it all over again tomorrow in a heartbeat.
And if that wasn't enough Monty was featured in this month's Creative Review! 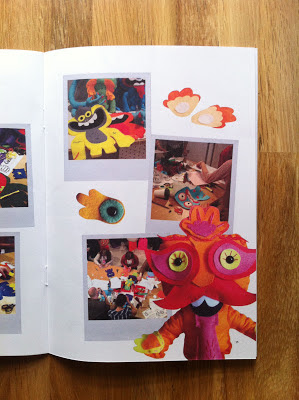