Over the last 2 years me and my little family have been privy to some select meet and greets with some fabulous authors and illustrators. This is largely due to our amazing bookshop Just Imagine, who pull in some huge names from the literary world.
Here are just a few names you might recognise:
But yesterday's chance encounter came via Twitter, when the illustrator James Davies made my 7 year old son's day! James is one half of the Space Penguins books. Josh loved 'Star Attack' so much, we ordered 'Cosmic Crash' which arrived on Saturday and he couldn't wait to collect it.

We have Little Tiger Press to thank for helping us find these gems, as we're lucky to be on their Parent panel, where we get to review some of their lovely books. I must not forget Lucy Courtenay who writes the books and has made Josh so eager to carry on reading the series. (The only other author to manage that was Steve Cole and his Astrosaurs books.)

I happen to follow James on Twitter and tweeted him to let him know that Josh loved his illustrations, particularly Rocky with the mental eyebrows. Here's Josh pointing him out. 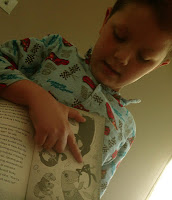 James responded almost immediately and very kindly offered to send Josh a signed copy of the next Space Penguins book. This obviously inspired Josh, as he disappeared and about 40 minutes later produced this:
I sent it to James and once again he came up trumps for Josh, telling him he loved it and that he would 'try' to sneak it in a future book. This was all Josh needed to be spurred on and he is using this fabulous Twitter story for 'Show and Tell' on Friday. If that wasn't enough, James blogged about Josh! Read it here.

And here's what a very lucky Josh received in his Priority penguin parcel.

A beautifully penned package containing the next Space Penguins book, signed by James and more importantly, a personalised Rocky illustration which now has pride of place on Josh's bookshelf. Thanks again James!