Yesterday saw my art class with the UK's top hyperrealist artist, Sarah Graham. I was super excited to spend the day at her studio with 5 other peeps to get a glimpse into her world.
In preparation, I made some Chupa Chup cupcakes (2 of Sarah's infamous subject matters) 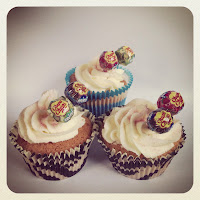 and created a Dudebox  'Mini Me' vinyl toy of Sarah by way of a thank you.

We were treated to a tour of Sarah's studio and had a nose at the shelves that provide her with much of her inspiration for her paintings. 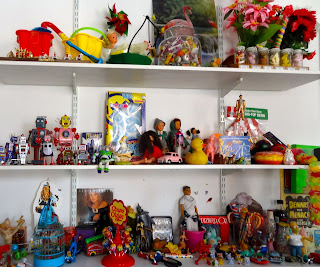 Sarah talked about her paintings, how they've evolved and the people she's met along the way. Her introduction to Ricky from the Kaiser Chiefs, meeting Gary Barlow and the Sheikh who has a room dedicated to her work. In fact, she talked so much, she lost her voice by the end of the session.
I don't want to spoil the day for anyone who is due to take one of Sarah's classes, but we did a couple of exercises to 'loosen us up' and break the ice. I won't say much more, but it was a fun prelude before the 'serious' painting began.
We were even lucky enough to see Sarah make a start on a new piece and were given some top tips on how she starts the process. 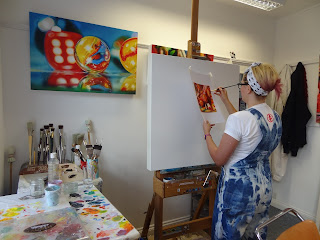 Then came the scary part... we selected the image we wanted to recreate and got started.
I  haven't painted acrylics on canvas for years and for me, this was a hugely therapeutic 6 hours, which whizzed by, but I managed to pick up some top tips along the way.
Sarah can talk for England (must be a trait for Sarah's in general) and has some amazing stories, but is still very much grounded and manages to get herself into the most surreal situations. (They will stay a secret between us though, Sarah)
A fab day out and one I highly recommend if you have even an ounce of creativity, whatever your style or ability. It was also lovely to meet other keen artists with all sorts of creative backgrounds. Kelty (hope I spelt that correctly!) pimps up mannequins and Heidi is an art teacher who is using Sarah's work with her students, lucky students!
Sarah's iconic album cover of the stick of Kaiser Chief rock just fetched £10,250 at auction and every penny will be going to charity.
A special shout out to Mr Sarah Graham too, as he played a massive role in our day, making sure we were all suitably fed and watered and brushes cleaned.
Posted by Unknown at 03:21