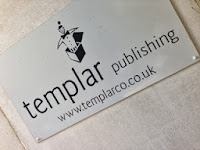 Last Wednesday saw my final day at Templar Towers. Where on earth did those three months go?

For those of you who read my earlier posts you'll know that it was a chance encounter via Twitter, with the fabulous Book Sniffer, that I got the opportunity to be their Marketing Intern and one I am SO pleased I jumped at.


It was fab to get to meet my 'twin' aka Emma O'Donovan. Following several tweets, we seemed to share a growing number of mutual interests, including vinyl toys and other such obscurities, albeit we had to gloss over a couple of small issues such as Marmite and Sherry! But I also got to meet some of my literary heroes and heroines at Emma's Christmoose Bash. Such a lucky Intern. 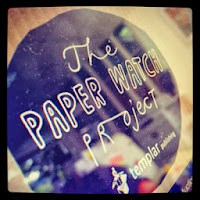 Whilst at Templar, I had the pleasure of working on their Paperwatch Project. Templar's charity auction of 88 paper watches designed by the UK's top illustrators in aid of Breast Cancer. Raising over £3000 for the charity, we have a bunch of generous and talented illustrators to thank. I'd seen tweets about the initiative and was thrilled to be able to play a part. I'll never forget the excitement of watching the closing seconds of each auction as bidding wars started!

Getting a sneaky peek at the picture books coming in 2014 was like Christmas come early. I sat through my first picture book meeting with a constant grin on my face. One of the things that drew me to Templar in the first place was the quality of their books, so to see what was on the cards for next year was hugely exciting. I got to work on Emma Yarlett's new book, Orion and the Dark (April 2014) an absolute 'must have' and saw snippets of Gemma O'Neill's second book (August 2014). I loved Gemma's initial offering and it was great to see how she'd top it (and she has).

If you follow Templar on Twitter/Facebook, (if you don't, you should) you'll know there are some serious cake bakers there and I wasn't disappointed during my brief encounter. A total of 3 epic cakes, various cupcakes, homemade biscuits, 2 gingerbread christmas trees and countless chocolates!

Emma, thanks for taking a punt on me. Templar Towers, I hope to visit again at some point and to all you Templar peeps, thanks for making my Internship such a memorable one.

There is only one thing that I won't miss... the greatest car park in the UK aka the M25!